Last night, I installed Windows 7 Home Premium edition on my two year old desktop PC, which I pre-ordered from Amazon UK in September for £68 (including VAT and Postage). The total installation process took about 20 minutes, which is quite good considering that I had spent an hour or so on Windows XP installations in the past. So officially, I installed Windows 7 a day before it was released in the shops.
This is how I set out installing Windows 7 on my desktop PC.
The hard disk on my PC has two partitions. On the first partition I had Windows 7 RC and on the second I had Windows XP. As a good measure, I backed up my Windows XP partition first. Thereafter, I backed up the Users folder in Windows 7 RC. I didn't install any software that I had bought for Windows XP on Windows RC, expecting that I might need to reinstall when the official edition of Windows 7 gets released. In the end this proved to be the right move, because, Windows 7 cannot be upgraded from Windows 7 RC or even from Windows XP directly. Only a clean installation is possible in either case.
Coming to the installation itself, firstly, I booted from the Windows 7 DVD-ROM and tried to install straight-off the DVD-ROM onto the Windows 7 RC partition, but the software didn't let me do it. I had Windows XP on the second partition, so I logged onto Windows XP and clean installed onto the first partition, leaving the Windows XP installation intact. A screenshot of the new operating system.... 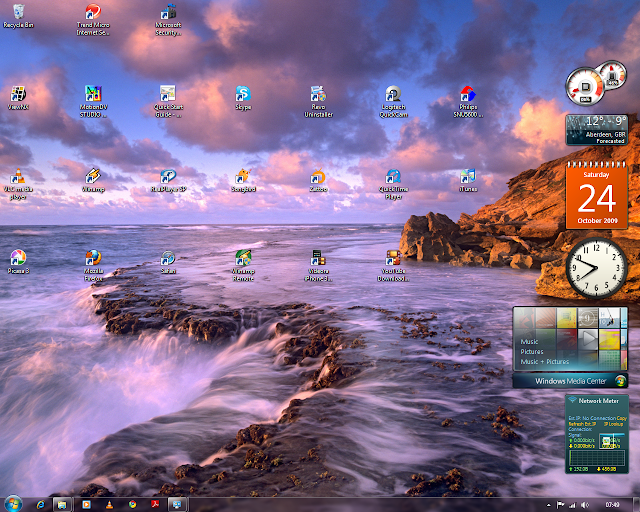 POST UPDATED ON 24/10/2009:
A couple of days later, I received three further installations of Windows 7 Home Premium Edition from Amazon UK, which I pre-ordered in July for about £45 each (including VAT and postage). Though I ordered an Upgrade Edition, Amazon were gracious enough to send the Full Edition. This is a great value for money offer, because I was able to upgrade four Windows XP machines to Windows 7 for £200 (half the price of a decent Notebook and less than the price of a Netbook).
Posted by Unknown at 12:56