During my visit to Blackpool, there were so many obese people I saw at the Zoo, restaurants, Pleasure Beach, roads, hotels and the Blackpool Tower. It seemed like middle Britain is inflicted with the obesity epidemic. I cannot say the same about Aberdeen, a place where I work and live.

Googling for the articles on 'Obesity in Britain', I came across the following news articles (courtesy Daily Mail), which seem to confirm what I saw in Blackpool. However, the articles do not suggest that obesity is only restricted to middle Britain. The epidemic appears to be much more widespread.
Fat Britain: Tackling the obesity epidemic. Click here.
Overweight Britons are among the fattest in Europe. Click here.
13m obese by 2010. Click here.
Posted by Unknown at 21:46 No comments:

Email ThisBlogThis!Share to TwitterShare to FacebookShare to Pinterest
Labels: Health

The world stock markets took a beating this morning following the news that Lehman Brothers, the fourth-largest investment bank in the US have filed for bankruptcy. 5000 people in the London office have lost their jobs. Now HP is set to cut 25,000 jobs over the next three years. If this can happen to the biggest names in the business world, then nobody is immune from this once in a century economic crisis the world is undergoing at the moment.
Posted by Unknown at 12:11 No comments:

Email ThisBlogThis!Share to TwitterShare to FacebookShare to Pinterest
Labels: Finance

I use Ubuntu as an alternate operating system at home in place of Windows XP. I started using it extensively since the release of Fiesty Fawn, which is a year and a half back. It is installed on my external hard disk (WD Passport). Ubuntu is an operating system based on Linux, which is free and the community help pages are more than adequate to help a novice or an intermediate user. I managed to get help whenever I got myself into sticky situations. The most recent one was to do with the Network Manager, about which I'll write in a future post.
Following the release of Google Chrome (newest entrant to web browser market) earlier this month I wanted to install it on Ubuntu, but was disappointed that a Linux version is not available. I got to know that it could only be done using Wine, a Windows Emulator on Linux. My experience with Wine isn't that great till date because of its inability to provide the full functionality of a windows software (like iTunes, Winamp, Realplayer etc.) on Linux.
Scouring through the Google results I came across a website which showed how to install Google Chrome on Ubuntu using VirtualBox. Wow! I thought, a virtualisation software, where I could run software built for windows (which do not have a Linux equivalent) without having to leave Ubuntu. I loaded my virtual version of Windows using Virtual Box following the instructions on the above website. I then installed Google Chrome and voila. Here I am using Google Chrome browser to access my blog and write this post without having to leave Ubuntu. 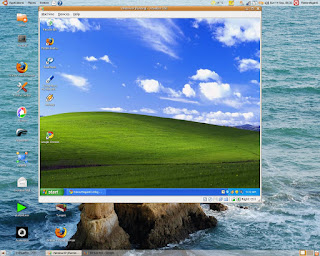 I could have done the same dozen other ways, but I chose to do it this way.
Using VirtualBox I can run the fully featured Real Player, Windows Media Player and also Winamp. I will download iTunes some other time and am sure it will work just fine.
Posted by Unknown at 08:38 No comments:

Britain's economy is hit by the credit crunch. The stock market which had a great run in the past three years or so, is officially into its bear phase. FTSE 100 has fallen from its lofty heights of 6400 on May 19th this year to the current 5300. The same can be said of the housing market. There are more sellers than buyers and the situation just seems to get worse. The news is Barratt Homes (one of the biggest builders in Britain) is trying to attract buyers by paying stamp duty on houses worth up to £500,000 and protecting people selling their Barratt-bought homes from house price falls of up to 15% for the next three years. Such innovative ideas may attract the buyers, but the mortgage lenders are few and far between. Furthermore, London brokerage Savills expects house prices in the UK to fall by 25% over the course of 2008 and 2009. This would surely put off the first time buyers from stepping onto the property ladder.

I had an interesting incident that happened recently, which prompted me to come up with this post. In my earlier post I mentioned that I ordered a Seagate 1 TB Hard Disk from the BT shop. The original order was made on 20th August, scheduled to be delivered by the courier Amtrak on the 22nd. I called them up on 22nd afternoon saying that nobody would be at home and I would collect the parcel from their depot on 23rd, which happened to be a Saturday. On 23rd I was informed that due to some technical reasons they were asked not to give parcels to any customers. Only later did I come to know that Amtrak had gone into Administration on 22nd.

Email ThisBlogThis!Share to TwitterShare to FacebookShare to Pinterest
Labels: Finance

After a long wait for two weeks, I got my 1 TB Seagate hard disk yesterday, which I ordered from the BT Shop. I have a Dell Dimension 9200, which originally came with a 250 GB Seagate hard disk. I needed the extra storage space for my videos and pictures and to backup my hard disk. Initially, I was a bit apprehensive about installing it myself, as I have never installed an internal hard disk before. I looked at the Dell manual available online, which gave the necessary instructions on how to replace one.

The Dell manual missed out the vital point about screwing the hard disk onto the bracket. An other aspect to note is the SATA cable and the power cable in the box supplied by Seagate are too small to be of any use. It is advisable to atleast buy a SATA cable, the one with a single right angle connector for installing a hard disk in a similar Dell make PC.

Post installation, I enabled the hard disk in BIOS and then formatted it using the Seagate Discwizard software. The software had the following handy features: add new disc (which let me do my partitioning), clone disc, image backup and image restore. The software is available for download from the Seagate website. I cannot vouch for its use on non Seagate hard disks as I never had a chance to use on one.
Posted by Unknown at 20:15 1 comment:

Last week I installed a Beta version of Google Chrome ; the latest entrant to the browser market from Google. BBC website featured the pre-release news about the web browser in the UK. On 1st September I looked at Chrome’s comic book feature, which made me sit up and take note, as it seemed a pretty innovative way of presenting a new product launch. After a pretty long wait on 2nd September, the eventual moment arrived at 9 pm GMT when it was available for downloading. The downloading and installation processes were pretty uneventful.

My first thoughts are the browser is definitely quick. I am a great fan of Google Maps and I always had trouble loading them in other browsers; Firefox, IE, Opera and Flock. In Chrome they loaded almost instantaneously. The picture in YouTube appeared a bit better than in the other browsers. However, it doesn’t work on music sites with embedded media players. Raaga.com is one of them, which uses an embedded Realplayer.

The feature I liked the most in Chrome is ‘One box for everything’, i.e. merging of the address and search boxes into one. ‘Incognito mode’ feature may seem new and innovative to the IE and Firefox users, but in Safari the Private browsing mode has been available since 2005.

The experts verdict is it has bugs. The foremost one is the carpetbomb bug, which for the moment has kept me away from using Chrome as my default browser. My wish is all the known bugs are removed before its final stable release.
Posted by Unknown at 20:10 No comments: