Here is how Ubuntu 10.10 (Maverick Meerkat) appears on my desktop PC. 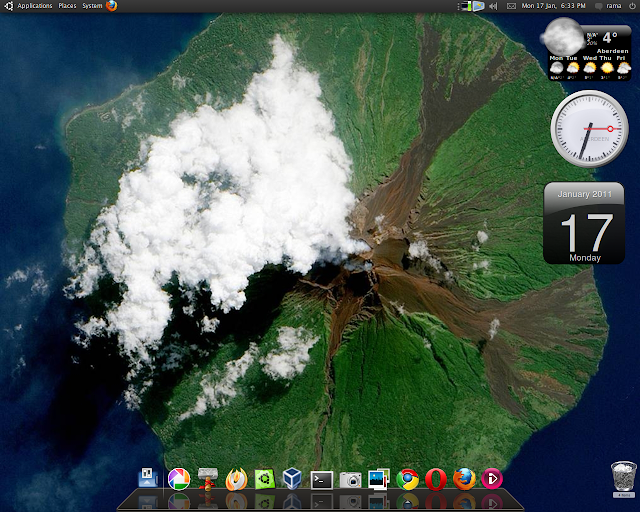 The dock bar at the bottom is achieved using Awn, whilst the theme used is New Wave. I like the dock bar so much that I haven't changed the appearance of Ubuntu for some time now, except for the background.
Posted by Unknown at 18:38 No comments:

Solution to iPhone not being recognised in Ubuntu after upgrade to iOS 4.2.1

I was unable to connect my iPhone on Ubuntu 10.10 (also known as Maverick Meerkat) following the upgrade to iOS 4.2.1. I tried numerous solutions and none of them worked. I finally succeeded with some help from this post.

Here is how to do it. Run the following commands in Terminal....
sudo add-apt-repository ppa:pmcenery/ppa
sudo apt-get update
sudo apt-get dist-upgrade
Posted by Unknown at 20:47 No comments:

I have followed Notion Ink adam's progress for the past year or so. adam is an electronic tablet or slate, which runs on an User Interface (UI) named Eden overlaid onto the latest Android OS (a mobile operating platform). Three years in the making, adam is ready for official release. The pre-order phase (open for a week) ended in late 2010. Notion Ink created waves during CES 2011 and adam received rave reviews by the tech bloggers. A few selected links of the tech blogger's hands-on videos:

There are few web blogs run by the fans of Notion Ink adam. These are;
If you are interested to know more about adam's workings, there are a lot of videos on this official Notion Ink's Youtube Channel. The young CEO (aged just 25) of Notion Ink, Rohan Shravan, runs the company's official blog, which has a wide following amongst the Notion Ink fans. The blog managed 5 million hits so far, since its inception in April 2009, the highest being on 9th December 2010 (the day of the first pre-order), when it reached a peak of 310,000 hits.

The orders are likely to be open shortly and for those who are looking for a new electronic tablet/slate, which is competitively priced and has got all the features one expects on a tablet, look no further.

Here is the promo video of adam....
Adam Promo from Notion Ink on Vimeo.
Posted by Unknown at 20:36 3 comments: