eBook readers and why everyone should have one?

eBook readers and why everyone should have one is a very topical subject. eBook readers have come into vogue with the arrival of Amazon Kindle a few years back. Kindle is a nifty device which works on e-ink technology and so does other eBook readers like Nook, Sony, Kobo etc, which makes reading a pleasure. But would I subscribe to the overall experience of reading a book on a Kindle, is the big question?

I always like to use technology, which reduces the use of paper. Books and bills are one such means to reduce its use. I subscribe to getting all my bills electronically and I have started to read e-books instead of the conventional paper books. The downside of this method is one needs a computer with internet access to get the bills and access their books. Amazon has created a great framework, whereby one can access these books via a Kindle device (using Wi-Fi or 3G) or any other device like a computer, tablet or a mobile phone. This is smart thinking. The reason being one can read a book at any place provided the books are downloaded onto their device. I started to read books on a mobile device and a tablet since the middle of 2011. The first book I read completely from cover to cover was Steve Jobs: The Exclusive Biography by Walter Isaacson. I read this book on both the mobile phone and on a tablet and I found the experience very very revealing. I didn't have to carry a book with me all the time to read it. I read it wherever I chose to, at car parks whilst waiting for my children, at lunch breaks, at coffee breaks and wherever I found a spare moment. So far I finished reading four eBooks. Coming to the question of Kindle. There is always a feeling that reading eBooks does not give the same experience as one would get reading a conventional Book. I beg to disagree. Coming to the big question, whether Kindle or any other e-book reader gives one the experience that is different from reading on tablets with LCD or Pixel Qi display.  I agree partially that the display on eInk readers is superior for reading books, but the interface with keys is very clumsy. I find that quite off putting. For example, the Kindle Keyboard which I had a chance to read is not the one I will choose to read books for the simple reason that I need to press a button to turn pages and the page changes with a flicker of the screen, which is not the same as reading on a touch based device. Kindle Touch might be the answer, but this device is not available in the UK.

So touch based eBooks is certainly the way people need to adopt to read books. It could in form of a eBook reader or a Tablet. This would save cutting of trees for the use of paper. This year alone there were 1 million + new titles published around the world. Translating this into number of trees that must have been brought down to make paper, your guess is as good as mine. The effect this has on the environment is just unmeasurable.

The following photograph depicts the display of text on three devices, Amazon Keyboard Kindle, iPhone and Adam tablet. The app on both the Adam tablet (Android) and iPhone (iOS) can be viewed on black background with white text or white background with black text. 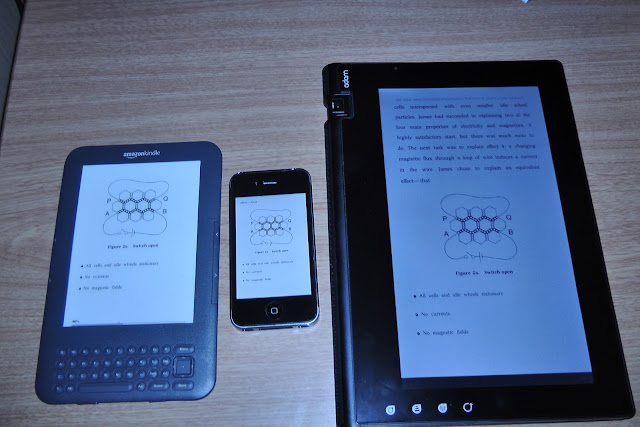 Satellite navigation (SATNAV) for surface transport especially for cars has been around for many years now. My earliest use of electronic maps was about 6 years back. Back then, I was using HP IPaq handheld device for navigation. It  had TomTom Route planner maps loaded for navigation. I used this device to navigate around UK, Netherlands and Portugal. My first true device for Satellite Navigation was Garmin Nuvi 270. The reason I bought this device was it had both Europe and US maps pre-loaded. The countries I navigated using this device were UK, Netherlands, Belgium, Germany, Spain (with some nervousness as the maps were outdated and many new roads just didn't exit, thanks to the drive by the European union to have roads across EU states to be of similar standard) and US. This device is fairly solid and gave very little aggro. I didn't have any major mis-routes so far.

In this post, I will try and present a test I ran using three devices whilst navigating from Birmingham to Aberdeen. Based on the success I had with Garmin Nuvi 270, I bought the Garmin app, touted as the best navigation app on iPhone. As people might have noticed, iPhone GPS in its current state is unusable with Google maps. Its lock on location is off by atleast a few tens of metres. But with Gamin app, the GPS worked like a treat.

As two of the three devices has a common provider, Garmin, the comparison is more between Garmin and Google Maps.

I was most impressed with the Garmin device. The Garmin display (even the old one) is very good and the battery drain rate is very reasonable. On full charge it would last atleast 4 hours of driving time. There are a few glitches with navigation routing and even the latest update of the maps missed a few fixed speed cameras in Birmingham. I am very certain that the latest devices by Garmin would be far more advanced than the one I am having and would make navigation more easier.

I was impressed with the Garmin app for iPhone. This app is a good middle solution as it would save one carrying a separate navigation device. However, this device stopped warning about speed cameras mid way through my journey. The routing by this app is very accurate. Furthermore, its prediction of the final time of arrival is fairly spot on. The battery drain rate was ok. A full charge would last me a couple of hours of driving. Not ideal but passable. One needs to carry a in-car charger to charge in case the battery runs out. For Garmin app, I need to buy an addon extra to get live traffic updates, which is not ideal.

I was also impressed with the free Google maps navigation software. The plus side of this software is it is free. Furthermore, it warned me about traffic hotspots via the 3G network. Its used more traditional and widely used routes. It failed to route me through less congested routes to avoid traffic. However, the battery drain rate was the highest on this device. It barely lasted more than a hour from full charge. The ZTE Skate was running the latest ICS ROM, which my son ported onto this device after painstaking hours of work. Android OS still needs to get its act together with regards to battery drain on its mobile devices.

My winner in this test is Garmin Nuvi 270 for obvious reasons, good display, accurate routing and long battery life. Here are photographs of the three of them side-by-side. 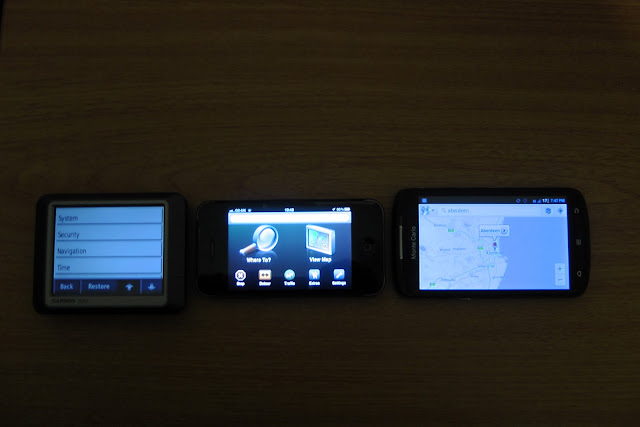 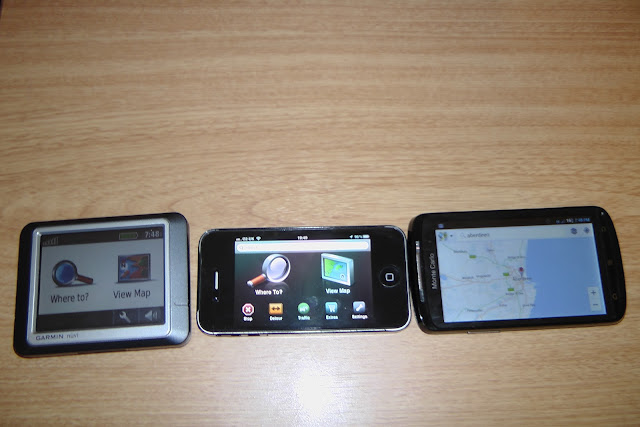