Sometimes the unexpected comes from quarters one least expects it. In an earlier post on Lifetrons X-mini Capsule Rechargeable Speaker, I mentioned that my Dell Inspiron 8200 internal speakers had stopped working for sometime. Furthermore, it had a problem with its Trackpad. I felt that the Palmrest/Touchpad Assembly (Part No. 3H400) comprising of Palmrest, Trackpad and internal speakers needed to be replaced. I found a used one on eBay for £14.99. Following the replacement of the assembly, the speakers started to work, which was totally unexpected.

I now have a fully functional Dell Inspiron 8200. This notebook is six years old, but still works fine for VB programming, web design using Dreamweaver, MS office related work and web browsing. My seven year old uses it ocassionally to browse the internet and do his homework. Though there is a two year old desktop at home, which both my children use to do their homework, using the notebook right now seems a bit of a novelty to them.
Posted by Unknown at 19:08 No comments:

Hurrah! I have now officially entered the Apple Mac user club. After dilly-dallying for years, I finally took the plunge and bought the new 13-inch Apple MacBook.
For the past many years, I followed Steve Jobs presentations at the MacWorld Expo. Despite liking whatever I read about the advances made by Mac, I was somehow reluctant to enter the Mac kingdom. The reason behind the reluctance is partly to do with Mac's closed architecture. I personally don't like the idea of using a system built on proprietory hardware, which restricts the end user's ability to customise it according to his or her needs. Unlike Windows and variants of Linux, which work on any Personal Computer (PC) that has suitable hardware, OS X only works on Mac hardware. One cannot install OS X on any other hardware. Mac operating systems (OS and OS X) have been around for years, however the tying up of OS X to proprietory hardware has stifled Apple's growth in the world of mainstream computing. Though the degree of sophistication a Mac provides in terms of User Interface (UI) is quite outstanding, I don't see it replacing a Personal Computer, which meets the demands of most users around the world. The reasons are a computer unlike a personal music player like say an iPod, has a certain degree of dependance on various peripheral devices it interfaces with, which requires an open architecture for quick and effective development. Furthermore, there are many software (for example: programming), which just cannot make their way onto a Mac because of its closed architecture.
The above rant brings us to the question, why did I buy the Mac in the first place?

In 2006 Apple released an Intel-based Mac, which had the potential to natively run Windows-based operating systems on Apple hardware using Bootcamp. This gave the users the ability to use Windows applications on a Mac. This was the principal reason behind my purchase of the MacBook. I wanted a system, where I could use the OS X for working on digital movies and natively run Windows applications for my day to day work.

After using the MacBook for a few days I am very much impressed by it, though it took me a few hours to get used to the various keys for obvious reasons. I opted for the latest model, which has the Aluminium unibody design, LED display and a giant Trackpad. Having dismantled my Dell Inspiron 8200 a few days back to replace the palm rest assembly (and the difficulty it posed with numerous small feeble parts), I can really appreciate the advanced Aluminium unibody design of the MacBook. Both the LED display and the giant Trackpad whose functionality is quite similar to that on a iPhone/iPod Touch are worthy additions to the MacBook.

I ordered the MacBook on 16th Dec and it was delivered on 22nd Dec, which is quite quick given the fact that it was custom built and shipped from Shanghai. Here are a few photographs .....

Dell Inspiron 8200 internal speaker has stopped working for more than a year now. I however get sound when connecting the headphones to the audio out port. The solution I found out was the motherboard needs to be replaced; which I reckon is an expensive option for a six year old notebook.

Whilst on my flight to India (in KLM's inflight magazine) I came across this tiny speaker manufactured by Lifetrons of Switzerland. The product is the world’s first extendable vacuum bass speaker, utilizing the patented Bass Xpansion System™ (BXS) technology which was developed and powered by Singaporean based technology company XMI. It costed me 30 Euros, saving me an expensive motherboard replacement. I am certainly impressed with the quality of the speakers. 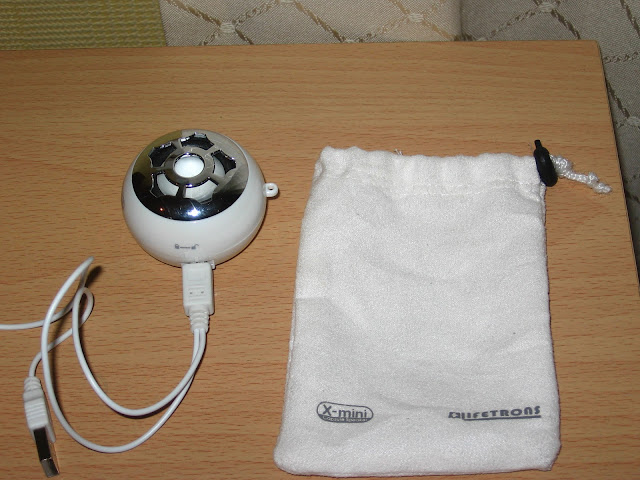